Review: The Breeders by Katie French 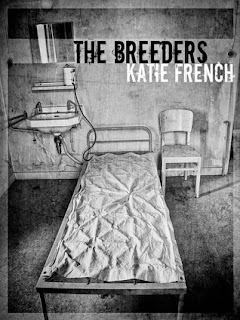 Sixteen-year-old Riley Meemick is one of the world's last free girls. When Riley was born, her mother escaped the Breeders, the group of doctors using cruel experiments to bolster the dwindling human race. Her parents do everything possible to keep her from their clutches-- moving from one desolate farm after another to escape the Breeders' long reach. The Breeders control everything- the local war lords, the remaining factories, the fuel. They have unchecked power in this lawless society. And they're hunting Riley.

When the local Sheriff abducts the adult members of her family and hands her mother over to the Breeders, Riley and her eight-year-old brother, Ethan, hiding in a shelter, are left to starve. Then Clay arrives, the handsome gunslinger who seems determined to help to make up for past sins. The problem is Clay thinks Riley is a bender-- a genderless mutation, neither male nor female. As Riley's affection for Clay grows she wonders can she trust Clay with her secret and risk her freedom?

The three embark on a journey across the scarred remains of New Mexico-- escaping the Riders who use human sacrifice to appease their Good Mother, various men scrambling for luck, and a deranged lone survivor of a plague. When Riley is shot and forced into the Breeder's hospital, she learns the horrible fate of her mother—a fate she'll share unless she can find a way out.
MY THOUGHTS


Best opening chapters ever! If I could say only one thing about this book it's that statement. Imagine what the rest of the story is like! I was hooked from the first sentence and as with all great books it's difficult to define why. Was it the incredibly high stakes? The strong and immediate point of view or the high impact writing? Possibly a combination of all three. After the quick start the pacing does slow down a little but I appreciated the chance to breathe and get my bearings on the setting as well as see Riley interact with her family who are the driving force behind all her actions.
The Breeders draws you into a dystopian world where women are scarce and in high demand for their ability to have children. This was one of those premises where you have to suspend belief more than usual and skeptic that I am I just found myself going with it instead of questioning everything like I usually do. I'm still not convinced that all men are evil and would turn their wives/daughters/sisters in for a big bag o'cash but in this instance it didn't stop me from enjoying the storytelling.
Riley is a strong YA heroine. She's requisitly beautiful but in her world beauty is dangerous. She gets around pretending she's a bender and has to tape up her breasts every day. She's feisty but not rough and I liked that she could be tough without having to be a physically violent heroine. The thing that displays Riley's character the most is her relationship with her younger brother Ethan. Sometimes she's the rigid older sister wanting him to stand on his own two feet. Sometimes she's a stand in mum. Other times she's possessive of Ethan and gets jealous when he shows interest in other people. All traits which show the dynamic of their insular upbringing and adds a bit of realism to the story. As for Riley's relationship with Clay, I'm not completely sold. He's nice enough and says and does all the right things, I just think their chemistry should have had a lot more tension considering he didn't know she was a girl. There is one scene in particular when they have a moment which is huge and should have been a speed bump in the relationship for sure but Clay is just too accepting and accommodating. I guess I just prefer my YA boys with a bit more bite.
On the whole The Breeders was an engaging read. Consider it if you enjoy western themed dystopian with lots of action. I couldn't put it down and can't wait for the next installment.

Reader's View: On The Subject Of Reviews

I've been spending a lot of time stalking Amazon reviews lately and one thing I've come across which has been interesting is the helpful or not helpful tags at the beginning of the reviews. It's got me thinking about what makes a good review.
I'll be the first to admit I don't have any kind of plan when I sit down to review a book. Often I just type whatever comes to mind and hope that in the end it's coherent. I've gone through some of the reviews I've written on this blog and although they're okay, I wonder if they are what would be considered "helpful."
As a reader of reviews I appreciate the time and effort that some reviewers put into writing a really lengthy piece. It's true that the longer the review the more likely there will be helpful thoughts in there, but do we necessarily have to always write an essay to get the point across? A lot of bloggers have short sub-headings in their reviews to give a one or two word summary of certain aspects of the book. For example explicit language, romance level, violence level and so on. Is this a more efficient way of approaching reviews, especially if you're strapped for time? Or does it not provide enough context?
Clearly I am still have problems deciding how to structure my reviews so that they are both easier to write and so that readers get the most out of them. So give me a hand guys, what about reviews do you find most helpful?
Posted by Lan at Saturday, June 08, 2013 9 comments: 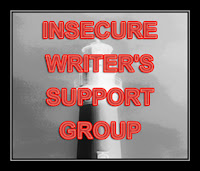 Insecure Writer's Support Group is a blog hop hosted by Alex J. Cavanaugh where totally insecure writers can get together and share the things that are making us go argh!!!!!!!!!!!!!!!!
I don't know why I torture myself but I've been researching what makes readers pick up book and continue reading them and by and large there have been lots of comments about people giving books a certain number of chapters or pages before they tend to give up. If you're anything like me (and thank goodness there aren't more readers like me) you tend to pick up a book already on the offensive, practically looking for reasons to put it down in favour of other pursuits.
I normally try and give a book a few chapters. If there's not anything in there that hooks me than I won't bother picking it up again. What I've come to realise recently is that my few chapters rule is majorly flawed because there are books which take a while to build up. Sometimes books have to get all of the boring stuff out of the way before the action really kicks in. I almost gave up on To Kill a Mockingbird because of the tedious first chapter and I'm eternally grateful that I didn't.
Of course this has made me go through the first few chapters of my own WIP with a fine toothed comb and as a result I've done about three revision of the first chapter alone. I'm at a point now where I am thoroughly sick of my WIP but I live in perpetual fear that it's still not good enough and won't hook anyone in. So tell me, what are your rules for picking up a book? Are you one of those readers who can't stop reading a book regardless of how much you dislike it? Or are you like me mercilessly dropping books like flies?
Posted by Lan at Wednesday, June 05, 2013 13 comments: