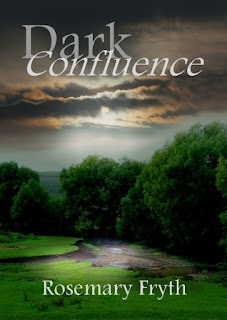 THE STORY
The small Queensland country town of Emerald Hills is under siege. Jen McDonald, a small, neat, almost-overlooked spinster in her fifties faces a quandary. Traumatised by a car accident after seeing a mysterious, dark-shrouded figure on the road, the last thing Jen wants to be is a heroine. Is she losing her mind, or is there a far more malign reason for the terrible storm, frightening deaths and vanishings, and other mysterious goings-on in Emerald Hills. Jen feels trapped, not only between warring factions of the Fae, but also by her desire for one of them and that she may be fated by her special gift to be the town’s defender.

Dark Confluence is an Australian-themed, short novel in the dark fantasy genre. It is a modern-day adult fable, and through allegory, it deals with themes of self-sacrifice and the acquisition of power at any cost. It is written for readers eighteen years and older.

The Basics
Above all else, Dark Confluence was a surprise. Being an avid reader of YA I don't usually find myself drawn to or identifying with older protagonists. There's something about Jen McDonald however, that hints at a deep seeded vulnerability and I found myself instantly drawn to her. Reluctantly content with a quiet life in a sleepy country town, Jen is the last person who would suspect that a freak accident could be the mysterious workings of a paranormal element. Gifted (or cursed depending on how you look at it) with the ability to see the influence of the Fae, Jen must work past the barriers she's built to overcome the disappointment in the life (and love) she could have had in order to save the town and restore order to the courts of the Fae.
Dark Confluence is an easy read filled with affable and genuine characters. Jen is unassuming and quite happy with her lot despite the pain of her past. There's no self pity or angst in the way she conducts herself and for that I fell in love with her. Whilst most of the story is told from Jen's perspective, we do get an insight into the thoughts and motives of several other characters as well. There's a distinct lack of melodrama in Dark Confluence and yet the description was so beautifully simple that you can't but feel as if you're right in the midst of it all.

Rosemary Fryth does an excellent job of building the tension and atmosphere in Dark Confluence. It happens so slowly that it's almost imperceptible and then before you know it, you're submerged in a cloying fog that smothers every rational thought and you don't for a second see it coming. Silly me didn't realise this is a dark fantasy book and though there are some gory scenes, the worked to add another layer of depth to the often cruel and terrible nature of the paranormal.

Aussie Shout Out!
I'm so proud that Rosemary Fryth is Australian and that I've been to many of the places mentioned in Dark Confluence. This never happens with any of the other books I read so I'm having a fangirl moment here. And yes, the country towns in Queensland are that beautiful and full of those kinds of genuinely nice, neighborly people. Shame I live in dreary Melbourne.

I Can't Believe I'm Saying This
I'm not usually one to complain about lack of romance but if there's one thing that could improve Dark Confluence it would be some more fleshed out scenes with Fionn, Jen's smouldering Fae lover. They barely had any time together and I found it difficult to reconcile their feelings for each other beyond the physical. I'm hoping that there's a sequel to come despite the ending where the Fae world is explored in more depth.