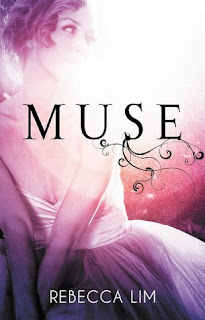 THE STORY
An angel in exile, caught between lives ... and loves

Mercy is an angel, exiled from heaven, and when she wakes in the body of nineteen-year-old Irina, Mercy discovers that she′s one of the world′s most infamous supermodels on the verge of a very public breakdown. Against the glamorous background of Milan′s opulent fashion world, Mercy continues her increasingly desperate search for Ryan Daley, the mortal boy she remembers falling for in a past life. But this time, Mercy′s memories and powers are growing ever stronger - and she begins to doubt the pleas of her dream lover, Luc, as more of her mysterious past is revealed. Are Luc′s desires as selfless as her own or does he want her for a more terrifying purpose?

The grand scale celestial battle for Mercy′s soul builds to an incredible stormy crescendo as archangels and demons clash in a cataclysmic showdown that not all will survive ...

The Basics
I started reading Muse a couple of months ago and had to put it down for a rainy day. I knew I'd need it as a back up after a particularly terrible bout of YA books. Based on other reviews I've read, I know that some readers don't like Mercy as a character. I personally love her. She's cold and often uncaring and just the closest representation of how I think an angel would behave.
This installment sees Mercy sub planted into the host body of world famous supermodel Irina. I love how Mercy is unaffected for the most part by Irina's lifestyle and beauty. She neither covets nor shuns Irina's looks and astounding wealth. Though that doesn't extend to her appreciation of beauty in her male counterparts. A trait she freely admits to having. And who could blame her? If I rolled with a horde of gorgeous angels I'd be swooning over them too. Not that Mercy does this is the normal YA sense. In fact Mercy does nothing in the normal YA sense and I think that's why I love her so much.
Mercy finally breaks free of the bonds which hold back her memories and we learn of the events leading up to her exile as an angelic body snatcher. I must admit I'd already figured out most of the reveals, but that didn't really phase me. It was obvious that the memories weren't meant to be difficult to work out, more that Mercy herself had so much trouble piecing them together because the angelic interference brought on my her constant body shifts.
It's clear how much research Lim has done for this series. Where other books just skim the surface of the world of angels, Muse in infused with  layer upon layer of it. I'm doing a lot of research into angels for my own story and I had a semi attack of excitement every time another angel I recognized appeared.

The Craft
I'm going to take a moment to let myself be jealous of Rebecca Lim's incredible writing talent. Like the previous books in this series, I can only describe the writing style as a poetic symphony. The style fits particularly well with the heavenly plot, adding a sense of etherealness that I haven't seen before in any book except maybe Daughter of Smoke and Bone by Lainy Taylor.

The Literally Star Crossed Loves
I complained of a lack of Ryan in the last book. That complaint still stands. What's with Aussie writers and the ability to imprint a character so vividly on a reader without giving them much page time? Ryan is the kind of love interest I want to be able to write. He's sweet and easy going which is hard to pull off given the scale of the events in this book. Sure it's unbelievable that he keep uprooting himself to go in search of her but no less so than some of the other stuff that happens in other books. I'm in awe of how accepting he is of the stratosphere of crazy that gravitates towards Mercy. How vulnerable he is as a mere human in the face of the highest order of angels. I can't see a HEA for Mercy and Ryan but that won't stop me from hoping for it.

One Tiny Complaint
I've only just realised how large the print in this series is and wish that the books were longer so that more time could be devoted to flashing out a few things. Things like people's reactions to Mercy's true nature for one. I know if I found out there was an angel inhabiting the body of someone I knew my reaction would be a heck of a lot of screaming and not such easy acceptance.