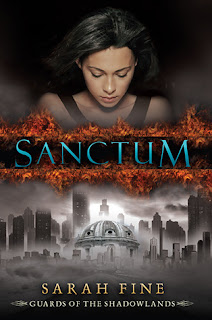 
A week ago, seventeen-year-old Lela Santos’s best friend, Nadia, killed herself. Today, thanks to a farewell ritual gone awry, Lela is standing in paradise, looking upon a vast gated city in the distance—hell. No one willingly walks through the Suicide Gates, into a place smothered in darkness and infested with depraved creatures. But Lela isn’t just anyone—she’s determined to save her best friend’s soul, even if it means sacrificing her eternal afterlife. As Lela struggles to find Nadia, she’s captured by the Guards, enormous, not-quite-human creatures that patrol the dark city’s endless streets. Their all-too-human leader, Malachi, is unlike them in every way except one: his deadly efficiency. When he meets Lela, Malachi forms his own plan: get her out of the city, even if it means she must leave Nadia behind. Malachi knows something Lela doesn’t—the dark city isn’t the worst place Lela could end up, and he will stop at nothing to keep her from that fate.


The Basics:
Sanctum started off as a gripping read and although the plot and romance took a sour turn for me, the writing was easy to read and flowed well. I really liked the way Fine described the surroundings in the afterlife and the world created in Sanctum had so much potential. I enjoyed the action scenes the most because they were so intense. There wasn't any sense of going easy on the violence to spare the characters and that made it all seem much more realistic. Sadly, there wasn't enough action for me and too much time was spent on huge chunks of back story and love fluff.

The Disappointment:
After reading the sample of Sanctum I had really high hopes that Lela would be much like Rose from Vampire Academy. Lela's had a rough upbringing and Fine hints at some very traumatic experiences in Lela's life that has molded her into a tough no nonsense girl. Lela even has a parallel best friend named Nadia who is very much like Lissa from  VA. Sadly, I felt the same way about Nadia as I did with Lissa. That she was useless page fodder to gain sympathy and create depth that wasn't truly there. We're told from the first page of the book how amazing Nadia is but for most of the novel Fine doesn't really show me anything redeeming about Nadia. We learn that Lela feels as though Nadia saved her but after having read Sanctum I'm not sure what that was. At the point where Lela and Nadia meet Lela has already mostly gotten her life together so I guess Nadia may have saved Lela from loneliness? For the most part I thought Nadia was a selfish, whiny character who treated Lela like dirt for the first few scenes. As a reader, I still don't understand why Lela risked everything for Nadia.  Others have mentioned that this book deals with the issue of suicide but I don't really see that coming through. Nadia's reasons for taking her own life aren't really dealt with except in a superficial I wasn't as perfect as everyone thought I was kind of way.

Lela begins as such a strong willed character but half way through the book she does a complete one eighty turn and Sanctum becomes a gushy YA romance trope. Lela is meant to be street savvy but she makes a heck of a lot of stupid decisions and it seems that the ultimate goal of the villains in Sanctum is always to get in Lela's pants above their other evil plans. Even the so called good guys who are essentially dead can't resist having a crack.

The only truly redeeming quality of the book is the world that Fine has created. It reminds me quite a bit of the Soul Society in the manga Bleach and had so much potential.  Though again I was disappointed by the lack of explanation about many facets of the world building and I still don't exactly understand what the Mizikin are. I tend to judge a book by how many times I fell asleep reading it or how many pages I've had to skip because the plot isn't going anywhere and sadly this is one where I had skip quite a bit. I'm not going to even go into the deus ex machina of an ending.

The Romance:
Insta-love. All consuming and without explanation. I can't even go into this without getting annoyed. The first time we see Malachi I was fist pumping because he was so badass and then two pages later he's been watered down. For the rest of the book Malachi turns into this moody, lovesick teenager who will risk everything he's worked decades for to save Lela. I place this romance on par with my distaste for Bella and Edward. Not happy.