Review: The Gathering by Isobelle Carmody 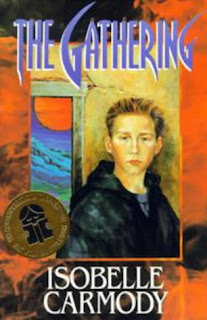 When fifteen-year-old Nathanial moves to a sinister town that has been bruised by an ancient evil, he finds himself one of those Chosen to fight the cycle of darkness.

The writing was clear and the premise was interesting. I would have liked to see a bit more world building as I found myself asking questions that were never resolved. I enjoyed the themes in this one even if at times I wanted the main characters to have a bit more agency.

This started out being a 5 star read because of the premise but the closer I got to the end of the novel the more some of the aspects began to bug me. One of my pet hates is the use of cryptic messages from a mysterious being attempting to guide a group into saving the world. I understand the need for tension but to have someone speaking in riddles when there is so much at stake is aggravating. Especially when there hasn’t been any established rules that prevent the person from speaking plainly.

I didn’t mind Nathaniel as a character but as the POV character I didn’t really believe in his portrayal as a “thinker.” So often secondary characters dropped clues that he didn’t pick up and it took him way too long  to come to a conclusion that was quite blatantly obvious. Nathaniel had almost no fight in him and when certain events happen I was disappointed in his tame reaction. I would have much preferred for Danny to be the POV character because he had spunk and was a man of action.

As with most YA I didn’t care for the attempted romance in this one. There just wasn’t any need for it as it neither seemed organic nor did it really advance the plot in any way. Perhaps I would have enjoyed it more if the love interest hadn’t been such an unpleasant person as well.