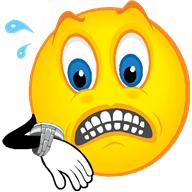 As an unpublished writer, I firmly believe that there will come a time when you happen across a novel which sounds so much like yours, the plot of Single White Female will flash before your eyes and you start going into panic mode. (Okay, so I just made this theory up because it's a great lead in for this post but let's not get bogged down in the specifics, I am having a freak out after all!)
This very thing happened to me a few days ago. I was blog stalking and going through my dashboard looking for posts that looked interesting and then I came across This Book. It's called Genesis by John G. Hartness and it's so much like Iron Willed that I'm starting to have a conniption.  Sure the style and voice are different and the setting is across the globe but at the end of the day, 'a rose by any other name would smell as sweet,' right?? (You know things are bad when I start quoting Shakespeare).
I know what you guys are thinking, no two novels will ever be the same because no two writers write the same way. But let's face it. As a writer, when you're squirreling away all those little words, you know you're secretly thinking that the story you're writing is 100% unique. So it comes as a shock when you find out that there are other people who have watched X-men, The League of Extraordinary Gentlemen and various anime who will most likely be thinking the same thing as you.
So my question is: Have any of you guys ever found a book so closely matched with your own that you wonder if the other author has secretly found out about your idea and just written a story faster than you?  Have you ever given up on an idea because it seems as if the market is saturated with books like your own? Do you ever feel like you are running out of time to write because you want to be the first one with a great idea? Come on people. Freak out with me!
Posted by Lan at Tuesday, November 15, 2011