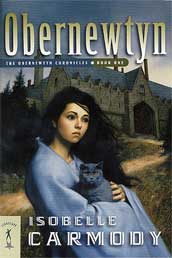 The Story (from goodreads):
For Elspeth Gordie freedom is-like so much else after the Great White-a memory. It was a time known as the Age of Chaos. In a final explosive flash everything was destroyed. The few who survived banded together and formed a Council for protection. But people like Elspeth-mysteriously born with powerful mental abilities-are feared by the Council and hunted down like animals...to be destroyed. Her only hope for survival to is keep her power hidden. But is secrecy enough against the terrible power of the Council

My Thoughts:
This is another re-read for me. The sixth book in the series has just come out and it's been so long since the last one was released that I'm going to read them all again and refresh my memory. This is way off topic but I remember when my older sister bought this book home from the library, I took one look at the cover (a different one to the pic. Was much uglier) and title and pretty much wrote this one off. Then I got bored and decided to give it a try and now here I am 15 years later still waiting anxiously for the next installment to be released.
Obernewtyn is essentially a post apolocyptic fantasy about the world struggling back from the brink of a nuclear holocaust. I have to admit that reading back over the story, there are some inconsistencies that I never picked up when I first read it, but to me personally they didn't really matter. This series is still amongst my favourite. Here comes another listy review:
Things I Liked:
- There's not much in the way of physical action in this book but Carmody has managed to instill sense of suspense and impending doom. Others have called this book slow but I found it a nice change from the usual YA formula of boarding school, mean girls, hot guy.
- Elspeth. She's not your usual impulsive teenager. She's guarded and aloof and very detached. I think it's a good portrayal of a loner which she def is. It's so good to see a character who accurately shows the symptoms of their upbringing instead of the loner who just happens to really be a social butterfly.
- The world building is incredible and the plot is very well thought out.
- The animals. I'm not at all a cat person, but this book features the only cat that I like besides Garfield.
- All the different mental abilities. I am a sucker for this kind of power.

Things I didn't like:
- One of my pet peeves is when an author feels like they need to emphasize a certain accent by trying to write the accent into the speech. Why oh why? There's a fair bit of this in Obernewtyn but thankfully the characters that the accents are attached to are quite loveable so I decided to let it go.
- This first book in the series is very much a she's good and he's bad scenario. There aren't any characters that I would consider in that grey anti-hero area. If you're evil, you're really evil.