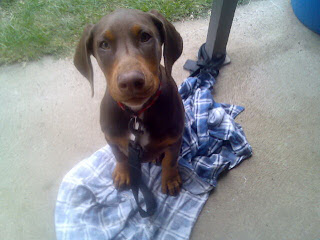 Every once in a while, someone like Jenny gives me some love and tags me in one of the floating blogosphere memes. I love answering the questions, but I'm too lazy to think of any of my own!! Plus I am sick with the flu AGAIN, so I can't be trusted to be coherent. So here goes:

Jenny's Questions For The People She Tagged

1 What is something you dread?
Public speaking. It's not that I'm horrible at it, it's just that I have no filter and I'm not very PC so I just end up saying whatever I'm thinking...

2 What is your favorite food?
Is this a trick question? It's be quicker if I say what I don't like. I don't like cheese, except on pizza.

5 Do you have any pets?
Yes, I have a doberman (See above). Her name is Tallis. My husband named her after some Australian rugby player. (Don't feel bad she's on a leash that day. My parents were looking after her for an hour at the time while I signed her up to puppy socialization class and my dad fed her 4 hotdogs which is a lot for an eight week old puppy).

6 What would you do if you got to meet your movie star crush?
That's for me to know and the restraining order lawyers to find out...haha that's a joke and you're smiling but somewhere out there Ben Barnes and Gerard Butler are feeling a chill up their spine! <-- seriously, I am delirious.


7 What would you do if you met your literary crush?
I'd have to fight off Kate Daniels for him and you know what? In the end, I'd probably just chicken out and run away!!

9 What book(s) have you been mad enough to throw across the room?
Mockingjay by Suzanne Collins. See THIS POST for some major book angst.

10 What book(s) have you hugged to your chest in love?
Anything by Melina Marchetta.

11 What was the name of a childhood stuffed animal?
I didn't have many toys when I was a kid but once the sisters at my church gave me a Arista doll. Arista in case anyone doesn't know is Ariel from The Little Mermaid's sister. My younger sister got the Ariel doll because she was younger. Blah. Anyway, despite being a mermaid, her job was being a martial arts instructor or a rock climber thus paving the way for many of my current literary heroines.

I hope you enjoyed a sneak peak into the crazy world that is my brain. Thanks again for tagging me Jenny!!