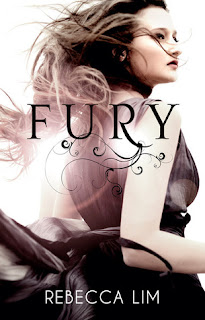 Mercy is an exiled angel cast down to earth and forced to live out thousands of different lives for her own protection. Betrayed by her eternal love, Luc, Mercy burns with fury. The time of reckoning is here and now she must wage open war with Luc and his demons. Ryan’s love for Mercy is more powerful than ever, but loving an angel is mortally dangerous. As their two worlds collide, Mercy approaches her ultimate breathtaking choice. Hell hath no fury like Mercy ...


MY THOUGHTS:
I've been reading a fair few angel books lately because my NaNo novel is about angels and it always gets me curious to know how a writer resolves the angel/human love equation. Unfortunately, I was severely disappointed with the way this book ended and it's a testament to Rebecca Lim's extraordinary way with words that I managed to finish reading this one at all.

The Plot:
I don't think I'm the only reader who has mentioned the anti climatic way Fury ended and how upset it made them after the incredible first three books in this series. I was three quarters of the way through when I finally realised what was bugging me so much. It was the phenomenon of a lot of doing but not much actually happening. In my opinion too much time was spent on the minor details, to the point where everything became mundane. Lim does an incredible job of building up the suspense but when it came down to the actual nitty gritty, I felt like the easy way out was taken and it all pitched on a word or a choice to be made rather than anything proactive on the part of the characters. I've always maintained that Lim is the only author I've read so far who has been able to convey the magnitude of what's at stake when angels are involved. To have so much build up only to have the ending fizzle out in a page felt like an insult.

The Characters:
This for me was by far the most disappointing aspect of Fury. Where I found Mercy to be a gritty, gutsy heroine in previous books, in Fury she came off as selfish and I'm so sad to say, a bit of a Mary-Sue. For all intents, she wasn't exactly blameless in her own exile and yet she and the other angels treated the situation like she was the one who was completely wronged. Almost all the other angels were her close friends or people who cared about her so much that they would give their lives for her. I counted at least three other angels who were in love with her for no reason that I could discern. She certainly was never described as being particularly beautiful, nice or caring. She of course had super special powers that the other angels couldn't fathom and was able to save everyone with a single word.

Then we come to Ryan. I so adored him in Mercy. He was a bit unbelievable but still charming in Exile and in Muse I was anxious for him to catch up to Mercy so that I could get a glimpse of what their relationship would be like when the two were finally able to spend more than a few minutes together. Now I wish their love was a tragic one that could never come to pass. There was a real disconnect between the Ryan that we were introduced to in the first book as opposed to the Ryan that surface in Fury. On the one hand, Lim did an amazing job of getting across how utterly useless humans are in the celestial fight between the warring angels. On the other, it thoroughly irritated me that despite not contributing in any meaningful way, Ryan became a whiny little girl intent on dragging at Mercy's coat tails until she gave in and risked many lives to allow him to follow her. The romance between the two verged on nauseating yet still managed to be essentially shallow.

The Final Verdict:
I know it doesn't sound like I enjoyed this book much and for the most part I did have to put it down and pick it back up again several times. The thing that saved it for me was the writing. Even though this wasn't my favourite book of all time I am going to miss the beautiful writing. If only the rest of the book was of similar quality.