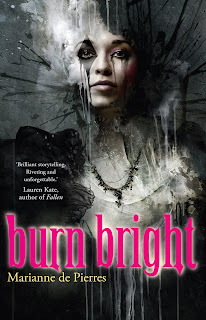 The Story:
Retra doesn’t want to go to Ixion, the island of ever-night, ever-youth and never-sleep. Retra is a Seal – sealed minds, sealed community. She doesn’t crave parties and pleasure, experience and freedom. But her brother Joel left for Ixion two years ago, and Retra is determined to find him. When she can’t find Joel, Retra finds herself drawn deeper into the intoxicating world of Ixion.
Who are the Ripers, the mysterious guardians of Ixion? What are the Night Creatures Retra can see in the shadows? And what happens to those who grow too old for Ixion? Retra will find that Ixion has its pleasures, but its secrets are deadly. Will friendship, and the creation of an eternal bond with a Riper, be enough to save her from the darkness?
My Thoughts:
Have you ever just looked at the cover of a book and thought 'yep this is going to be awesome?'. This is what happened to me when I picked up Burn Bright. It even came complete with a recommendation from my all time favourite Australian author Isobelle Carmody. Sadly, since finishing the novel yesterday, I am still not sure if I actually enjoyed it.
Let's start with the good. The cover, as I have said, is hands down the best cover I have come across in a long time. It epitomises everything the novel is about and I can imagine it would entice many casual readers to pick up the novel. Burn Bright is beautifully written and very well paced. The concept is entirely original and blends together several genres including sci-fi, fantasy and even a tiny bit of steampunk (very tiny bit though). The plot was interesting and was probably the main thing that kept me reading.
Why then, you ask, am I unsure I enjoyed the book? It's because I didn't feel anything for the characters. Including the heroine. She reminded me very much of Tris at the beginning of Divergent, except that I didn't warm to her eventually. I found Retra to be a very passive heroine and the few times that she does take matters into her own hands, it seemed a bit forced. Yes, her Seal upbringing meant she was innocent and a bit hesitant to participate but even when she was enlightened and chose an Ixion name, she still felt like a bit of a ghost in a shell. I suppose the reason I didn't care for any of the others was because Ixion is a hedonistic Island and hedonists tend to be the selfish, self involved types.
While the concept was great, there wasn't much in the way of world building or explanation so I was left wondering why Ixion was the way it was and what some of the creatures in Ixion were. Also, I couldn't quite believe that the enticement of a few years of parties would be a strong enough pull for teens to leave their entire world behind, especially since they had no idea what would happen to them once they got too old.
I want to reiterate that the above opinions are my personal thoughts only and I don't want to put anyone off reading this book because despite my reticence, I can really see it being very popular. I'll still pick up the sequel Angel Arias just to see if Retra grows on me. Plus I DID finish reading it pretty quickly, which is more than I can say for a lot of books.