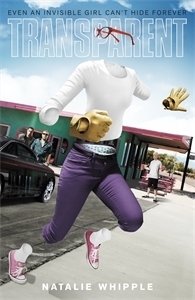 High school is hard when you're invisible.

Fiona McClean hates her family, has had to move to a new school and seems to be completely invisible to the boy she likes. So far so normal, right? But Fiona really is invisible. She doesn't even know what colour her own hair is.

Born into a world where Cold War anti-radiation pills have caused genetic mutations, Fiona is forced to work for her mind-controlling mobster father as the world's most effective thief. When her father announces she must become a murdering assassin, Fiona and her telekinetic mother make a break for freedom. Running to a small Arizonian town, Fiona finds that playing at 'normal life' with a mother on the edge, a brother she can't trust, and a boy who drives her crazy is as impossible as escaping her father.


This book has been described as X-Men crossed with the Godfather and though it didn’t really live up to either of those comparisons, the plot and voice were enough to keep me entertained.
Transparent follows Fiona O’Connell, the invisible girl, as she attempts to escape from her father’s crime syndicate.  In Fiona’s world, everyone is born with some kind of mutation as a result of radiation suppressant medication tested during the second World War. Most people have small mutations that might change the pigment of their skin or their hair colour but Fiona and her mother, a telekinetic, are rare. Fiona’s father has the ability to charm everyone around him using his pheromones and his empire has been built around a power enhancing drug called Radiasure. When Fiona’s father asks her to use her invisibility to become an assassin her mother decides they need to get out.
What follows is your typical teen high school drama with super powers involved. I have to admit, I did hope for a bit more involvement from the syndicate but they were mostly an off page threat. That wasn’t to say I didn’t enjoy the teen drama. It wasn’t full of mean girls and popularity contests which was nice and a few unique superpowers were introduced. I thought the pacing was great and the events that led to the resolution were clever. Transparent delved into the nuances of what it would be like to live completely invisible all the time and I felt it did this really well through Fiona.
Character wise, Fiona is the kind of heroine I wish I could write even though I thought she was a bit weak willed at times. That’s the point really. Fiona starts off as a sheltered girl trying to survive on her own and towards the end she evolves into a character with agency. I would have liked her to have a bit more spunk but that’s more my personal preference than a comment on the character development. Though I do have to say that the way she was treated by her older brother Graham seemed to be treated as no big deal which I found very strange. I wished Fiona would grow a spine and just knock him out. I found the secondary characters to be okay but not necessarily memorable. They were all very “greeting card” nice and so quick to trust and accept Fiona that I was skeptical the whole way through. The romance was a bit predictable but I’m not a big sucker for romance anyway so it was fine with me.
Overall I really enjoyed Transparent. It’s definitely a book I would recommend to those who like super powers. Just remember that it’s mutant-lite and not full on comic book superheroes.