The Time Stopper & The Thought Readers by Dima Zales 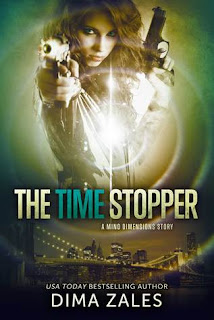 I can stop time, but I can’t change anything.
I can access memories, but not far enough.
My name is Mira, and my life is about finding the Russian mobster who killed my family.

I really enjoyed Mira as a POV character. I felt she was strong but was able to show vulnerability at the same time and it was a credit to Zales for being able to condense such a full impact story line into so few words. Mira is so different to the heroines that usually crop up in YA or NA books and I'm so glad for it. She's tough and crude and sexually free and I love that about her. I’m a huge fan of the mind reading genre and the concept of the thought dimension was a new one that I hadn’t come across before. Zales’ writing was engaging and very easy to read and I enjoyed the inclusion of Russian phrases and words to give the novella a more authentic feel. 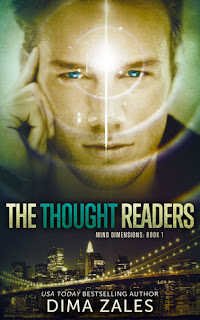 Everyone thinks I’m a genius.

Sure, I finished Harvard at eighteen and now make crazy money at a hedge fund. But that’s not because I’m unusually smart or hard-working.

It’s because I cheat.

You see, I have a unique ability. I can go outside time into my own personal version of reality—the place I call “the Quiet”—where I can explore my surroundings while the rest of the world stands still.

I thought I was the only one who could do this—until I met her.

My name is Darren, and this is how I became entangled with all the Russians and learned that I’m a Reader.


After reading the prequel novella, The Time Stopper, I was looking forward to continuing the journey in The Thought Readers. The Thought Readers is told in the POV of Darren rather than Mira and starts off in the middle of the poker game in much the same fashion as the novella.
This series has a unique concept in the mind reading genre that was executed very well. I enjoyed the initial insights into the thoughts of the secondary characters, though towards the end I felt there could have been less random mind reading and more concentration on building character relationships. As Darren mentions throughout the novel, it would have been nice to not be effectively told through mind reading what a character was thinking all the time. The idea behind the mind dimension was well crafted and I took it on face value. There was enough world building to make the concept plausible without spending too much time dragging down the plot.
Despite both The Time Stopper and The Thought Readers  being told in first person, Darren had his own distinct voice which I thought was well done because in a lot of books I’ve read with dual POVs, they all  tend to sound the same. I didn’t mind Darren as a POV character, mostly because of the great writing, but  as a human being I’m not sure we could be friends. Because of his abilities everything in life seemed to come so easily for him and I found myself at times feeling like he was a bit clinical in his reactions to some of the events in the plot. I’m hoping this is a deliberate move on the part of the author and that Darren’s perspective changes as the series goes on.
If I had one issue with The Thought Readers it was the insta-lust/love. I’m not a fan of this trope in any context and was a little disappointed when I came across it, especially given that I liked Mira a lot less in this novel than in her POV novella. Overall though, I really enjoyed the first installment in this series and will look forward to reading the rest and seeing how everything develops.