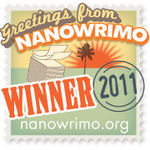 It's been almost two weeks since NaNoWriMo and I wish I could say that I've been busy finishing off my story and editing and all that writerly goodness. Instead, here's the real deal: I HAVE DONE NOTHING.
Besides occasionally looking at the November timetable that Jessica from Thoughts At One In The Morning made for use during NaNoWriMo and feeling mildly motivated to send Cathy of Abnormally Paranormal Reviews some chapters to critique, I've been a bit slack. On the other hand, after the crazy month that was November, I think I deserved a break. It's just that said break is now turning into a very long and unproductive vacation and without the looming deadline to keep me on track I fear that my story is heading into oblivion. But it's Christmas! I hear you all saying....yeah I know! Which is why I've decided to set myself some easy goals to make me feel as if I'm being productive and then the rest of the time can be for me going crazy with Christmas decorating and cookie making.
I've done some simple math (the only kind I am capable of these days despite the Asian genes) and have decided that I'll probably have to write another 40,000 in order to finish the book properly. If I set a goal of 1000 words a day, I should be finished by the end of January 2012. This gives me a lot of leeway for additional writing because I have two weeks off over the Christmas period.
What about you guys? How are you going with your NaNo projects now that it's all over?

Email ThisBlogThis!Share to TwitterShare to FacebookShare to Pinterest
Labels: NaNoWriMo