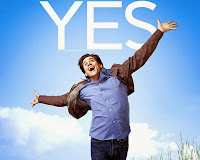 I don't think I'd be pushing the truth when I say that in general, we book bloggers are the quiet types. Speaking about myself specifically, I would go even further to say that I've got one foot in the hermit zone. I would much rather stay home and read/watch TV/stalk people on the internet, than go out and interact with real people. Sometimes, when it's a special occasion, I'll even feel a little resentful that something is taking me away from my life of quiet contemplation.
I'm not 100% sure exactly how this happened either. It's not as if I was a social butterfly once upon a time, but I had a few close friends and a wider social group. Now they're lucky to see me on their birthdays. On top of this, I find myself judging people/situations well before I've even been asked to go somewhere. So far, I haven't been very fussed with the decline in my social life, but I've been beginning to think that it's hindering my writing.
You see, the couple of times that I've come up with great story ideas, it's always been while I've been out with friends or at work. Very rarely do I have great inspiration sitting at home. This leads me to think that I could be missing out on situations that could resolve some much agonized over plot holes I've been trying to fill. Plus, I tend to think I'm closing a lot of doors on opportunities.
For example, I have somehow developed a strange aversion to garage sales. I think it's another symptom of my OCD. So when I had no choice but to go to one whilst my younger sister and her husband were driving me home one day, I wasn't impressed. That is until I came across a stash of near mint YA books for the price of $1 each. I walked out of there with 10 books for $10! Then at a recent work Christmas party, which I did not want to go to because I just couldn't be bothered, I told a colleague I was writing a YA novel and she said that she actually knows a publisher!
So the moral of the story is, as much as I would love to continue being a half hermit, I think it's better for me to get out there once in a while and embrace the real world and all it has to offer. So 2012 will be my official year of saying Yes to opportunities and invitations I would have tried to get out of earlier. Who knows, maybe I'll meet my potential agent on the train to the library one day :)
Posted by Lan at Monday, January 02, 2012