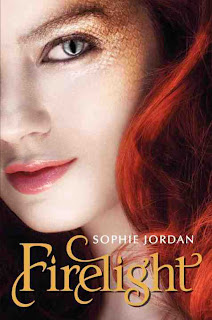 The Story:
Marked as special at an early age, Jacinda knows her every move is watched. But she longs for freedom to make her own choices. When she breaks the most sacred tenet among her kind, she nearly pays with her life. Until a beautiful stranger saves her. A stranger who was sent to hunt those like her. For Jacinda is a draki—a descendant of dragons whose greatest defense is her secret ability to shift into human form.
Forced to flee into the mortal world with her family, Jacinda struggles to adapt to her new surroundings. The only bright light is Will. Gorgeous, elusive Will who stirs her inner draki to life. Although she is irresistibly drawn to him, Jacinda knows Will's dark secret: He and his family are hunters. She should avoid him at all costs. But her inner draki is slowly slipping away—if it dies she will be left as a human forever. She'll do anything to prevent that. Even if it means getting closer to her most dangerous enemy.
Mythical powers and breathtaking romance ignite in this story of a girl who defies all expectations and whose love crosses an ancient divide. - From Goodreads.

My Thoughts:
I had to stop myself from reviewing this book straight away because I was seriously in danger of breaking my no ragging on other books rule. From the first few pages, I honestly thought I was going to love Firelight. Then I continued reading and it all sort of went downhill from there. I don't hate the book, plus I finished it so it was readable at least. Instead of writing a full on review I thought I'd list all the things that worked and didn't work for me.
Stuff that worked:
- My first love is epic fantasy, so the idea of beings decedent from dragons really appealed to me. The different types of draki and their various powers was very unique.
- I liked the writing style. I'm a really lazy reader and don't want to have to look up a dictionary every second word.
- Cassian is a cool name.
Stuff that made me want to scream into a pillow:
- Jacinda suffered from the Bella virus bigtime. She kept going on and on about how she was the only fire breather and how special she was and how much she wanted to keep her draki alive and yet when she was threatened she basically curled up into the fetal position and whimpered. My biggest pet hate is heroines with powers that they don't use.
- Quote in point: Then he mutters, 'A hunter in love with his prey.'  Cliche and copyright infringement much???
- So so so much whinging without anything being done about it. I am not a fan of passive MC's.
- I couldn't sympathise with any of the characters and downright hated Jacinda's mum and her sister.
- The most exciting scene happened in the first chapter, the ending was too cliff hangery and it was so anti climactic.

I'm not sure what else I can say, once more with feeling: At least I finished it!!