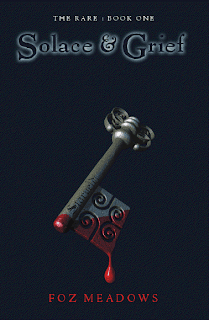 The Story:
Solace Morgan was born a vampire. Raised in foster care, she has always tried to keep her abilities secret, until an eerie encounter with a faceless man prompts her to run away. Finding others with similar gifts, Solace soon becomes caught up in a strange, more vibrant world than she ever knew existed. But when the mysterious Professor Lukin takes an interest in her friends, she is forced to start asking questions of her own. What happened to her parents? Who is Sharpsoft? And since when has there been a medieval dungeon under Hyde Park?
My Thoughts:
Sue recommended this book to me after I had a big whinge discussion with her about how I didn't think my MS would fit in with the current culture of publishable Australian YA. After reading Solace and Grief, I think I am even more dismayed. But that's another story entirely. Solace and Grief is beautifully written novel and blends the concepts of vampires and other paranormals or Rare with social issues such as homelessness, alcoholism and general displacement and listlessness.
Solace grows up in a group home where for seventeen years she feels as if she doesn't fit into the world. After dozens of foster parents fail to materialise on the day they are meant to pick her up, Solace is resigned to living out the remainder of her teenage years with the eclectic mix of other unwanted group home kids. That is, until the day the Faceless man begins to stalk her and for reasons unknown to Solace, she is compelled to run away. Solace encounters a ragtag group of youths in a club and almost immediately forms a bond with them. It isn't till much later that Solace learns that every member of her new found group of friends is a Rare and all have their own special Tricks.
Sound great at this point doesn't it? That's what I thought too at the beginning, and then the "getting to know you" bit went on and on and on. Much of the book is spent idly hanging around the Gadfly club where Solace initially meets her friends, or sleeping in the warehouse they all live in. While I was compelled to continue reading because of the premise and the writing, I have to admit that at times the story dragged and I almost thought it was a bit pointless. Things do pick up towards the end of the book though and I think the small twist was what saved it for me.
Character wise, there was a lot of scope for some great personalities in this book, what with the special powers and the sheer number of friends Solace makes. I really liked the idea of a group of ragtag teens coming together to fight evil. Unfortunately, this was one of the areas where I believe the author let herself down. Besides Solace's closest friend Manx (whose power is to turn into a giant house cat..LAME!), I can't remember anything distinguishing about any other characters. Even whilst I was reading the book, I kept thinking how interchangeable everyone was and there were times when I had no idea who a couple of the girls were. Solace herself was far from being a kickass heroine. Most of the action in the book was thrust upon Solace and she just reacted. Rather slowly I might add. For a vampire with super strength, I was disappointed with her if I were to be honest. Even the tiny bit of romance in the book felt incredibly out of place because of the previous disinterest shown by Solace and then when things started happening, Solace exhibited some overwhelming emotions that seemed to come out of nowhere.
I know it was meant to be a paranormal fantasy but I just couldn't suspend my belief for this book. If only because Solace's group of friends were meant to be street kids and vagrants and yet their dialogue was more befitting a high tea luncheon. I was also a tiny bit concerned with the very liberal portrayal of underage drinking, drug taking and general aimlessness. I'm not sure at this point if I'll check out book two. The writing as I've stated was incredible. That and the concept of the Rare has carried this book past the neutral rating mark. I'm not sure if I'm invested enough in the story to overlook the lackluster cast though.