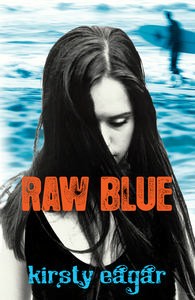 The Story:
Carly has dropped out of uni to spend her days surfing and her nights working as a cook in a Manly café. Surfing is the one thing she loves doing ... and the only thing that helps her stop thinking about what happened two years ago. Then she meets Ryan and Carly has to decide. Will she let the past bury her? Or can she let go of her anger and shame, and find the courage to be happy? - From the book jacket.


My Thoughts:
Raw Blue was a really difficult read for me at first. It deals with a lot of heavy topics such as rape, drugs and broken people, but I can handle all that. It was all the surfing jargon that really got to me. I almost stopped reading because of it. I understood that it was Carly's escape and the one thing that made her happy, but seriously, I just didn't care about the swell, the foam or the seagulls. Yes, I know that's a bad reason to get annoyed at a book but I couldn't help it. Thank goodness I decided to skim read instead of putting the book down altogether because I would have missed out on one of the best reads ever.
Raw blue is a poignant and powerful story that explores the life and struggle of a young girl after being victim to a heinous crime. I thought Kristy Eagar dealt with this delicate topic superbly and though some of the scenes are a bit sexually graphic, I don't believe they were overdone. Needless to say, this book isn't really for younger teens and if you're still intending to read it, let this be a warning to you.
As I'm finding with most Aussie author's recently, they have a way of creating characters that stay with you long before you close a book. Carly is shattered in more ways than one, and even though she prefers to keep to herself, many of her actions are involuntarily caring towards others. Like the way she always sets her cook's knife down in a certain spot so that no one can accidentally get cut or the way she is always trying to get anorexic Kylie to eat.I really liked her and thought she was very sweet for someone whose been through so much.
Then there's Ryan. He's by no means a cookie cutter YA guy. Ryan is a surfer and ex-drug dealer whose done time in jail. Told you he wasn't typical. If you're starting to pull away at this point, don't. Trust me. Ryan's made mistakes but what I love about him is that he's actually learned from them and is trying to improve himself. He's not just impossibly perfect to begin with. And he never gives up on Carly, no matter what. I think the bit that sealed the deal for me was when, after they'd been intimate, Ryan still called Carly 'mate'. Totally an Aussie thing to do!
I'm not sure how else to convey the brilliance of this book so I'm going to add two quotes that really spoke to me:


He pats the deck beside him with his hand. I sigh loudly and sit down with a thump. He takes my right hand and places it palm down on his chest. Then he traces around it with the pen, craning his neck to see, giving himself double chins.
'What are you doing?'
He shifts my hand away and starts scratching out letters on his skin. 'I worked out a tattoo - if I had one.'
I look at what he's done. He's got the outline of my hand over his heart and in it he's written, Her.
I want to tell him that he's blown me away, but I think he knows.
AND:

Whenever Ryan comes back it's great, then when he goes back to work it's awful...We've got rules for when he's away. If he's short and terse on the phone I have to know that it's nothing to do with me...and if we fight on the phone I can't just hang up. We have to sort it out that night because leaving an argument to fester is too cruel when you're away from each other. Some phone calls he doesn't say much and I know he's called just to hear my voice.


Rating:
10/10 (surfing crap and all)
*There's a lot of Aussie slang in Raw Blue so if you do end up reading it and need some translation feel free to drop me a line!
** I read this book as part of my 2011 Aussie Author Challenge.
Posted by Lan at Wednesday, August 17, 2011