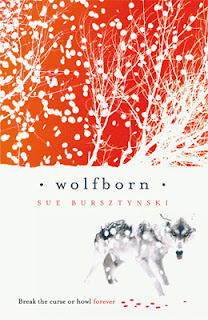 The Story:
Etienne, son of a lord in the kingdom of Armorique, goes to train as a knight with Geraint of Lucanne. Geraint is brave and kind, a good teacher and master - but he has a secret that he has kept from his family. He is bisclavret, a born werewolf. When Geraint is betrayed, Etienne must ally with the local wise-woman and her daughter, themselves bisclavret, to save his lord. But time is running out. If Geraint's enemies have their way, Geraint will soon be trapped in his wolf form.
And Etienne has his own secret. The decisions he makes will change his life forever… Inspired by a medieval romance, this engaging novel forces us to question everything we thought we knew about werewolves. - From the book jacket.

My Thoughts:
It's been a long time since I've read a book by a female author written from a male perspective. My brain is telling me the last one was The Outsiders by S.E Hinton but that can't be right, and if it is, it means I'm old because that was in high school. Anyway, the reason I mention the female author/male character dynamic is because I often find it puts me off an entire book if it's not done well. Thankfully, Wolfborn doesn't fall into that category. Etienne's voice was both believable and likeable and I found the premise behind the novel fascinating.
Wolfborn works on the assumption that being a werewolf is a gift from the gods and if you stay in your wolf shape for too long, you will lose your humanity. Its one of the rare werewolf books I've read that features the idea that werewolves need an article of their human clothing in order to revert back to their human form. Sue Bursztynski weaves this aspect into an interesting novel that deals with complex ideas but is also easy to read.
I think my favourite part about Wolfborn was that it was in effect a retelling of a twelfth century story that has it's basis in Irish and Arthurian folklore. This made me imagine that once upon a time the story could have been based on a true account and I did a little dance. Yes it makes me happy thinking that werewolves could be real.
Sadly, the novels ending kind of let the book down in my opinion.  The last few chapters focused mainly on Etienne's romance with Jeanne, the wise-woman's daughter, and I thought it was a bit unnecessary. The climax and struggle had already ended by that point and I wasn't sure why the novel was still continuing. Possibly to highlight that even love might not be strong enough sometimes to override a wolf's innate urge to be wild and run free.
Overall, I enjoyed Wolfborn and recommend it to anyone who's looking for an interesting but more traditional werewolf tale without the teen drama.


Rating:
8/10
Sue Bursztynski is a blogger as well! You can find her blog The Great Raven here.
This book was read as part of my  2011 Aussie Author Challenge.
Posted by Lan at Thursday, August 04, 2011